The history of aerobatics is as old and honoured as the history of flight itself. It was the same Wright brothers who performed the first aerobatic manoeuvre (a 360-degree banked turn) in September of 1904. And we use the word ‘banked’ because this was before the aileron was invented. A wing warping system was used at the time to flex the entire wing in order to bank the aircraft.

It was Dr. William Christmas and a group headed by Glenn Curtiss and Alexander Graham Bell, in the US, who almost simultaneously developed the aileron. Graham Bell had previously organized a group of young men interested in aviation in 1907, and called it the Aerial Experimental Association (AEA). Its purpose was to build a practical powered airplane.

It was then Walter Brookins, in 1910, who captured the attention of audiences with his spiral dives and 90-degree banked turns. Beachey came after that but, greatly affected by the death of a close friend and team member, went into temporary retirement in 1912.

It was Adolphe Pégoud, in France, who made the first public demonstration of inverted flight mid 1913.

Then, same year in September, Petr Nikolaevich Nesterov, from Russia, amazed the aviation world, performing the first complete loop, but it was a recovered Beachey who, soon afterwards, in 1914, became the king of the loopers, earning up to $5,000 a week, a great amount for the time. He flew loops in sequences of ten or fifteen at a time, starting at less than 1000 feet. He was also quite probably the first pilot to accomplish an inverted loop.

Oswald Boelcke and Max Immelmann, form Germany, became well known in the aerobatic world during War World I, as well as Fieseler, right after the war, specializing in inverted flight figures which could be flown in any weather. It was the Czechs, though, who mastered the sport in the 1930s.

World War II meant a great increase in fighter aircraft power and speed. The manoeuvres starting to be then what we can currently enjoy in the air shows worldwide.

The first squadron to be dedicated to aerobatic displays in the Spanish Air Force was created at the Base of Matacán, Salamanca, in 1954, and used North American T-6 aircraft. Then followed one squadron at Talavera la Real in Badajoz (with three Lockheed T-33s) and another one at the Base of Albacete, flying four Dassault Mirage F-1 aircraft, form 1980 to 1987. 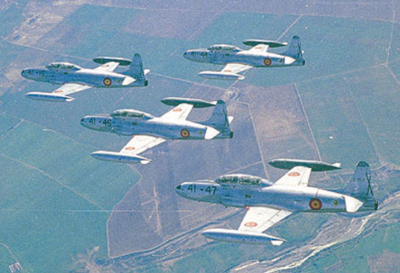 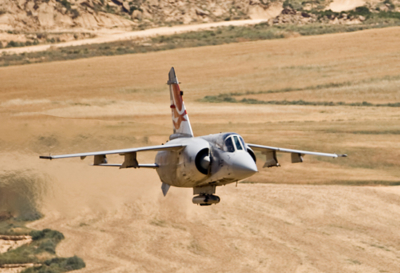 The first national aerobatics team flew four F-86 Sabre aircraft, painted in Spanish flag colors, from their Base at Manises, Valencia, in 1956, and performed later on for nine years under the name of Patrulla Ascua in memory of the nickname of a deceased companion, Capitán Berriatúa. 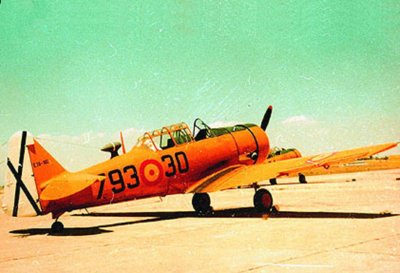 The current Spanish Air Force Aerobatic Team, Patrulla Aguila – Eagle Patrol – was formed in 1985, and was therefore the logical continuation of a tradition that had existed within the Spanish Air Force for decades.

One morning in June 4th, 1985, five CASA C-101 Aviojet training jets, built in Spain, took off from the Spanish Air Force Academy, flown by Air Academy instructors, to evaluate C-101 close formation capabilities. The pilots were from the General Air Academy. After just 10 days, a new team made its first public demonstration with four C-101s at the Jerez de la Frontera Air Base, under the name Patrulla Aguila. The aircraft were painted in standard trainer silver and orange paint scheme. In a second demonstration, they flew with five aircraft, and then in the third, with six Aviojet aircraft. The members of this Aerobatic They initial pilots were Captains Carrizosa, Polo, Lorenzo, Novau, Segura, Villanueva, Uribarri, Ferrer and Bordallo.

On July 16, 1986, Patrulla Aguila visited a foreign country, Belgium, for the first time.

In 1987, the use of smoke canisters was incorporated into displays, but at first only on three planes from main four-ship formation, excluding the leader’s plane, and only with white smoke, because previous trials of coloured smoke had failed. Later that year, they also visited England for an Air Tattoo.

On April 11, 1988, the team performed an air show for their Majesty’s, the King and Queen of Spain, at the General Air Academy in San Javier. In that show, Patrulla Aguila flew seven aircraft, all of them using white smoke. Later in that same year, the team’s pilots received blue flying suits, which became their official uniform.

In October 1991, the Patrulla Aguila C-101 aircraft received their present paint scheme, which was inspired from the initial team, the Patrulla Ascua.

On the Spanish National Day, 12th October, in 1992, the red and yellow colours corresponding to the Spanish flag were painted for the first time in the sky over Sevilla. Only 4 aircraft used smoke for a time being. Later in that same year, Patrulla Aguila took part in opening ceremonies of the Olympic Games in Barcelona.

By the end of 1992 show season, all of the team’s aircraft started to use coloured smoke. In 1993, King Philip -then Prince- was made an honorary member of the team.

The squadron now has over 25,000 hours of flying time under its belt, and has taken part in air shows and numerous other events in its role as an ambassador for Spain all over the world. 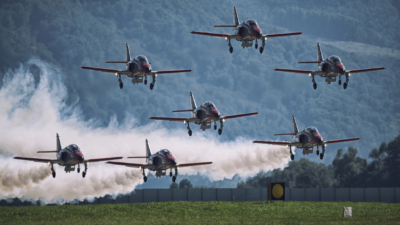 Visitors to the Mar Menor will often be treated to the spectacle of the Patrulla Aguila rehearsing in the skies above San Javier and over the waters of the lagoon during important events in the municipality.

Patrulla Aguila participates in shows all over Spain, and also in other countries, like Portugal, France, Italy or UK. 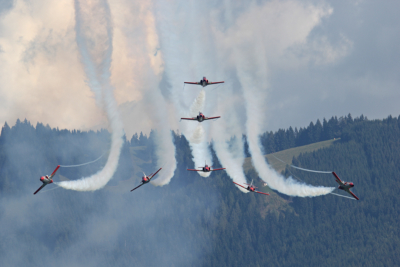 Let’s describe the different positions corresponding to the seven pilots: 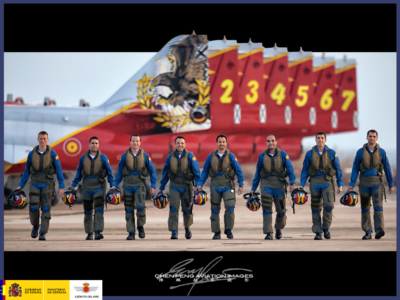 We must take into account, that the pilots are not full-time employees of the team, they are still instructors at the Academy, unlike the Red Arrows or Frecce Tricolori who are fully dedicated to the corresponding aerobatic teams.

We hope you have found this post interesting. It has been a pleasure for us to be able to learn some more about the team we are sponsoring June 9th-10th on Spanish Air Force Academy’s 75th Anniversary.